A little while ago I wrote some fiction regarding a conversation I had with Mr. Death. You can read it here.

It is a work of fiction but, as with many things, it had elements of true life in it – some of my real life experiences. One of the true items in that story is my desire to learn a new language – French (probably) and to learn how to sail.

Recently, we went on holiday. We went to Antigua. It was bloody brilliant. We flew out via Virgin Atlantic Upper Class (the posh class!) That was an eye opener. I’m not sure how PIL managed it. I think she got the geeks at work to hack into Virgin Atlantic and get us an up grade. Or it might have been her using the gazillion air miles we had accumulated over the years. We arrived at Gatwick, checked in and went to the Virgin lounge. We were offered champagne! It was 6am! Of course we accepted – it was free! We had all kinds of nibbles offered. More champagne was consumed. Our flight was announced and, slightly the worse for wear we staggered off and got on the plane. The leg room! Unfuckingbelievable!

We arrived in Antigua after a wonderful flight, being waited on hand and foot, totally refreshed and ready to go.

It was lovely. Smashing sandy beaches. Plentiful bars and restaurants. Pools dotted around. Absolute bliss. I noted a number of small sailing boats. Catamarans. I thought to myself, I can get started here. A problem arose though. We are a family that goes on holiday and we SLOB! We lie in the sun. We eat. We drink and that was the problem. Greg and I crept off to the gym at 6.30 each morning. We got back, we all showered and went for breakfast. By 9am we were sprawled out by the pool. At 10, when the bars opened we were getting a bit hot so we’d go get a drink. The intention was always to get a soft drink, 10am being a bit too early to hit the hard stuff but the bar man would point out;

So we had rum as well. And with no concept of portion control, they were heavy on the alcohol. After a hearty lunch I was probably too pissed to go sailing, let alone learn anything so I didn’t go.

As a great believer in not doing things by half, I decided my first experience of learning to sail would not be on board an eight foot dinghy but on a proper 50 foot sailing yacht! And that’s what we did. We chartered a yacht for the day. It was called Jabberwocky and it was owned by Nick and Kaye, who are two of the nicest people you could wish to meet.

We got a cab from the resort to where Jabberwocky was parked at a place called Jolly Harbour. Antigua is full of places with lovely names like that. We set sail. We had a choice. Snorkelling or beach. We’re slobs so we chose beach and we headed off to a place called Deep Bay. It was on our way here that I carried out my first ever sailing task:

I set the genoa!

I have no idea what that is or what I was doing except it involved some hard physical labour and I think I set the sail in front of the mast. I felt inordinately pleased with myself.

We arrived. The anchor was dropped and we took the little RIB to shore. It was just as you would imagine a desert island to be. Warm seas lapping on a soft sandy beach. There were a couple of other people there but it was heavenly. There was a small fort, Fort Barrington, on the hillside. Greg, CJ and I went off for a wander while PIL and Ed sat on the beach and swam in the sea. 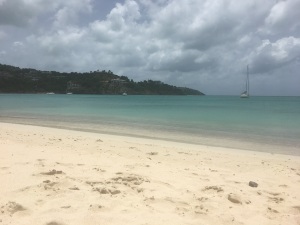 The beach at Deep Bay with Jabberwocky in the background

Time for lunch back on Jabberwocky. PIL, Greg and CJ took the RIB back. Ed and I swam back. I decided on back stroke but because I’m useless, without noticing, I started to swim back to shore. The others found this immensely funny. I just got tired!

Jabberwocky at anchor in Deep Bay

Lunch was lovely. Afterwards, we set sail again heading back to Jolly Harbour.

Once we got out of Deep Bay, I set the genoa again and joy of joy, I took the helm and steered the yacht on it’s way back to its home port.

Me at the helm of Jabberwocky

I was in heaven. It’s a lot harder that it seems and I’m sure my course was more than a bit ziggy zaggy but I was having a great time. The rest of the family were up at the pointy bit at the front and then they started to sing!

Having an absolutely brilliant time.

Over the sound of the waves and the wind in the sails I couldn’t make out the words but the tune was just about audible. One of them them was singing “Sailing”, the Rod Stewart song. Despite my surprise at one of my children actually knowing this song, I felt a huge sense of well being and happiness well up inside me. We were having a great time. My family up at the front burst in to laughter and they all started singing. As they did, the wind carried the words to my position at the helm. This is what they sang:

We have sunk now

Despite this, I will learn to sail and soon I will be visiting a local sailing club and begin lessons. I may just stick to smaller dinghies or catamarans but, who knows, I may go onto larger boats. We shall see and I will keep you informed about my progress.

Of course, let’s not forget that I also want to learn a new language but since trying my hand at sailing, that will now be TWO new languages to learn. The reasons why will follow soon.

Have a lovely day.