In The dog House. Again!

Ed, Greg and I are in the dog house with PIL. She’s not happy.

On Easter Sunday the two ‘boys’ went off to Stamford Bridge to watch Chelsea play Tottenham Hotspur. I couldn’t go as I was working and staying in London. They kind of wish they hadn’t now and not just because Chelsea lost. They met up with some guys that Ed had met when he went to Barcelona to watch Chelseas Champions League match (We lost that game too!) They all had a few beers before the game, a few more at half time and then went to a local pub with Eds new best friends for a few more beers. Then it was time to leave and get the train home. Late. On Easter Sunday. Essential maintenance on the whole rail network. They contacted PIL to arrange a pick up from the local station. PIL not amused.

“Get a cab home from the station” she told them.

They contacted her again. Trains stopping at Ashford and going no further. A 20 minute drive away. Can she please pick them up from there? Even I heard the sigh as she agreed to pick them up from Ashford International Station.

“What time does it get in?”

They drove home in silence but quite quickly.

Ed going to be late home from work which has been manic for the last couple of weeks. I went to pick him up from the local station. PIL went to bed as she had an early start in the morning.

Ed hadn’t eaten so I said I’d knock something up quickly while he watched the highlights of Real Madrid vs Juventus, another Champions League match.

I chucked a couple of bangers and some oven chips in the oven. Joined Ed with a couple of beers for us to enjoy while the game was on. Forgot about his dinner. Rushed out to the kitchen when I remembered hoping it wasn’t burnt. Opened the oven door and 2.73 seconds later the smoke alarm went off!!! Our smoke alarm is VERY LOUD and there’s a repeater upstairs. I, somewhat ineffectually, waved a tea towel at the alarm while Ed came out with a cushion and waved that about for a while. The alarm also set the dog off! Bloody mayhem. Ed grinned at me and said,

“Now you’re in trouble with Mum!”

And I was. I apologised the next day and PIL said;

It’s now Thursday and that couple of sentences along with a huge number of sighs has been the extent of our conversation. I’m enjoying the peace and quiet!

Oh. Plus a comment about leaving the toilet seat up. 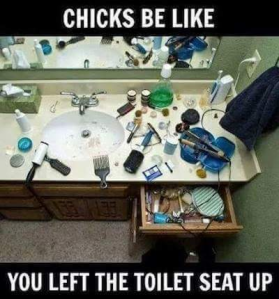 Have a brilliant day.