Have you ever noticed how when you’re having the time of your life, time just gallops by? So much for that Einstein bloke and his theories. 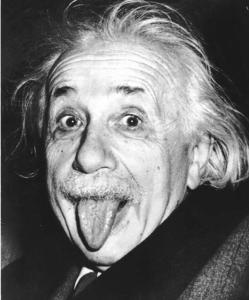 We were having a great time. Le Telfair had everything we needed, swimming pools, a beautiful beach, lovely sea, 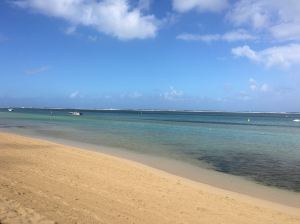 cold beer, gorgeous food, fantastic rooms and amazing views. So much so that we had no real desire to go off exploring. We did take one trip out on a sailing boat to visit a “paradise” island. It wasn’t called Paradise Island and I’m not entirely convinced it was an island. We were taken to the East coast in a minibus. The locals drive on the right side, which is the left. In keeping with their French origins, they do like to drive in the middle of the road whenever possible though. And sometimes, they drive there even when it isn’t possible. We went aboard a beautiful catamaran. There was us lot plus about half a dozen other people. We set sail by starting the outboard motors and headed off into the Indian Ocean.

We slobbed out at the pointy end at the front and drank beer. 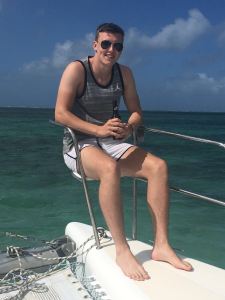 The crew was very pleasant even if they did look like pirates. After a while the crew chucked the anchor over the side and some of the passengers went snorkelling. We didn’t. There are sharks in the Indian Ocean and we didn’t fancy becoming a meal. The crew cooked up a barbecue and we had a lovely meal of freshly caught barbecued fish and more beer. It was sublime! It was on this little voyage that I discovered exactly what I want to do for the rest of my life. I want to do nothing more than sit on the little seat at the front of a catamaran, drinking beer, sailing around the Ocean and saying nautical things like;

Eventually, we arrived at the paradise island. We took a small boat to look at a waterfall, which was very nice.

CJ and Ed as we headed off to the waterfall.

Then we went ashore to spend a couple of hours poking about. I have to say that it was just like you imagine a Paradise Island to be with white, sandy beaches, cool seas, palm trees and a Swiss family called Robinson strolling along the beach.

This really is the island we visited.

That is, if you took the 3027 other people who were also visiting off the island and dumped them far out to sea. Bit of a disappointment that. We set sail again only this time we did set sail and cruised away and the incredible sense of happiness and well-being returned to us once more.

We returned to Le Telfair just as the sun began to set. 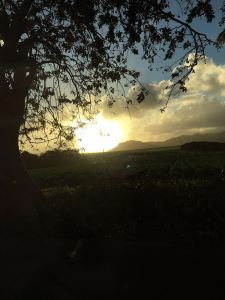 I don’t think I have seen us all quite so relaxed, happy and contented.

The boys decided to play another round of golf. PIL and CJ went with them after promising not to be abusive about the standard of play they were about to witness. I must say now that while Ed and Greg will never be pro golfers, they play a damned sight better than any of us could.

I decided not to go and instead sit by the pool, catch some rays, go pinker and read one of my books. I grabbed a book and made like a German and laid out towels over several sun loungers. I settled down and started to read, but not for long. The book I was reading was by a well-respected military historian named Antony Beevor and was entitled “ARDENNES 1944. HITLERS LAST GAMBLE” and it was about the Nazis attack more commonly called “The Battle of the Bulge”. After reading about 2 pages, I realised that very much like the US 101st Airborne Division in Bastogne during this campaign, I was surrounded by Germans!

Probably not the best choice of reading material under the circumstances. I returned to my room to find another book. I had one written by the author, poet, comedian and general raving lunatic, the late Spike Milligan. He is reputed to have engraved on his gravestone “I told you I was ill”. My kind of bloke. Anyway, the book of his I had with me was entitled “ADOLF HITLER. MY PART IN HIS DOWNFALL.” Hmmmm. Probably not.

In the end I took a book by Clarkson and had a jolly good browse through that while I singed around the edges. Everyone else eventually returned. Out of the 12 balls they took with them, they had 2 left but they had all had a bloody good time. 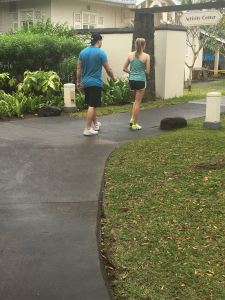 but generally all we did was chill out and relax. We walked along the beach. We indulged in good conversation. Sometimes we did both at the same time.

All good things come to an end eventually and unfortunately, so did our holiday in Mauritius. We had an absolutely blinding time there. We loved every second of our stay. Would we go again? Absolutely. Have to save up for a while though so not anytime soon. On that note, the Rio Olympics are on TV now so I’m off to watch that. Team GB are doing well so far and we won Gold and Silver in the slalom event which was good. CJ is glued to the swimming and the Womens hockey. She wants to know why ladies netball isn’t an Olympic event especially as the mens version is.