When I started this blog I had an idea whereby some of the posts that I publish are linked in some way to previous posts. There would be a thread connecting them. So, for instance, at the end of my first ever post, despite having no medical training, I offered advise on a specific medical condition. In my second ever post I wrote about my experience with that particular medical condition and at the end of it I again offered medical advise on another condition. My third post spoke about that and at the end of that post I offered financial advise and my fourth post was about how having children was economically disastrous. I then posted an email I had sent to my sister Boo some months ago and included a picture that looked nothing like her followed by a post about my sister again with a picture that looked nothing like her. And so on. 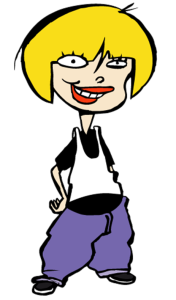 Boo. My sister. She looks nothing like this either.

I thought I was being pretty clever with these threads passing through my posts but then I realised (and I admit to being very slow on the uptake here), that it was all nonsense. The latest post is shown first so if you come in half way through then you have absolutely no idea what I’m on about. Of course, it is possible to have the first post first if you see what I mean but that means you have to plough through loads of older posts you may have already read to get to the latest one. What am I to do? I have thought long and hard about this and finally, earlier today I decided what I’m going to do about it. Fuck all.