I often forget what it says at the top of my blog thingy. “Life, The Universe and Everything That Matters to Me” and rabbit on about something trivial, so now to write about the most important thing in my life. Family. Obviously all the opinions stated are hugely biased and why not? They’re my opinions so I’m allowed to be biased.

Terribly boring. Hasn’t got a clue about most things that involve any technology more sophisticated than clock work and has issues with that as well. Spends most of his time attempting to avoid carrying out the tasks that PIL, the love of his life asks him to do and wonders why she gets the hump with him. Boring job that pays the bills (just). Rough men stand ready and all that.

Taken a split second before face slapping the snow. Again!

Drop dead gorgeous and totally unaware of it. When she walks it looks like she’s chewing a toffee with her butt. Smashing! Has a really cool job up in London working for this huge multi national company that apparently searches for engines. I believe they search for all kinds of engines such as automobile engines, aero engines, motor cycle engines, marine engines and probably more. I think PIL specialises in marine engines for fishing fleets as she’s always on about “trawling the net” and stuff like that. Dress code seems to be pretty casual and I have to say she fills a pair of skinny jeans admirably.

Our eldest. An ambitious young man who has continuously set himself goals. For some years now, he has set his heart on working in the City of London and that’s exactly what he is doing now. It’s with a company that deals with all the Tier 1 banks (whatever they are) so he gets to see every aspect of the financial world and he’s loving every minute of it. The company he works for seems well structured with continuous training, a commitment to promoting from within plus well thought out expansion plans. The possibility of working in places like New York is strong which is another aspect he likes the sound of. He worked hard at school and at University to achieve his goals. Like his younger brother and sister, he not only worked hard but played hard too with a great deal of success on the playing fields at rugby, football, basketball and cricket. Crap at golf though. Ed isn’t the best when it comes to trains as we have often waited at our local station to pick him up only to get a call from him to say the train got lost and he is now twenty miles away and can we come and get him as he spent the cash he had for a cab down the pub!

Did well in his ‘A’ levels and won a place at Aberystwyth University to study Human Geography with Economics. Greg decided to have a gap year as he had been in the education system from the age of 3 and really fancied a break after 15 years. PIL and I were happy with this. Then, he discovered a course that really caught his imagination, International Relations. So, he changed his mind and went to college to take a further two A levels; World Development and Film Studies. The former because he had become fascinated by this subject and the latter because he had always been interested in movies. He has conditional offers to the Universities he has chosen. He now has to decide and accept an offer from the one he thinks will provide him with the best education and also the best sports facilities as Greg also played football, rugby, basketball and cricket for the school. He also ran cross-country. Like his older brother he is also crap at golf. A fascinating person with the ability to name the starting line ups for all the Premiership football teams, the defensive and offensive starting line ups for the NFL plus the starting line ups for all the NBA teams plus all the rugby teams in both hemispheres and yet cannot remember where the dish washer is, how to turn it on and where all the stuff goes when its finished and needs emptying!

Having only just become a teenager, CJ has a long school career ahead of her. Like her two brothers she loves school and all that it has to offer. That, to a great extent is down to the school. She is currently at the Junior school and plans to board at the senior school come September. She is currently studying for the Common Entrance exam that will allow her to do this. As well as being clever like her brothers, something they got from their mum rather than me, CJ is also like her brothers in being very sporty. In 2014 she took part in the schools cross-country race. She came second. Not, I hasten to add, second in the girls or her age group but second overall! Earlier this year she was asked to swim for the senior school in a major inter school competition. She rocked up expecting to swim for the under 14s and actually swam for the under 16s! She came third in the individual 50 metre backstroke and wiped the floor with the opposition in the backstroke leg of the 50 metre medley relay. She’s captain of the Netball team, plays hockey and was in the ‘A’ team a year early. She’s also House captain and it has to be said her school reports are brilliant. To top it all, she was awarded the David Gower Sports Scholarship to the senior school earlier this month against some really stiff competition. The future looks bright for her as well. Now all we can hope for is that as a boarder at the senior school, they will get her to clean her room up. Messy just doesn’t sum it up. She leaves a trail of discarded water bottles, Ben & Jerries ice cream containers, shin pads, hoodies, trainers and hockey sticks all over the house.

Getting ready for some sport or other 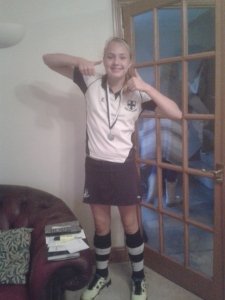 PIL and I don’t really mind though, our kids are just bloody brilliant and we love them all to bits and we are so proud of everything they do. (Well almost everything. There have been one or twelve little episodes that we won’t go into here, the toe rags).

Of course Dexter is an integral part of our family. Every household should have a pet of some description, whether it be a dog or a cat or a gerbil or a budgie. A rat, a snake, a spider or lizard. Dexter is a lovely, stupid dog that we love to pieces. Except today when he decided to roll around in some pretty pungent badger crap! Bastard dog! 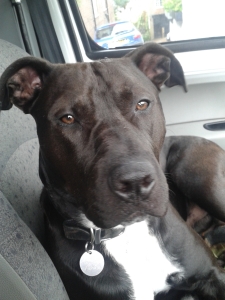 After the emotional stuff that left me completely drained, I thought it would be nice to be a bit more light hearted.

Some months ago I was walking Dexter, our dog, out in the fields close to where we live and took some video of him prancing about. When the crops are taller than he is, Dexter does this Tigger like jump so that he can see where he is. It looks cute. It’s taken me from April last year until now to figure out how to transfer the video from my phone to my laptop. Eldest son sorted it for me in the end. The video lasts for less than a minute. Enjoy.

Hitting the deck isn’t the problem. It’s getting back up again!