I must admit to enjoying a bit of gardening. Unfortunately, I don’t spend as much time as I would like pottering around doing gardening stuff like dead heading, planting out new plants, taking cuttings and enjoying the physical effort involved. Some of this is down to work but more often it’s the rubbish English weather on my days off that stop me.

I have been planning and plotting the other side of our front garden for some months now and progress has been slow.

Front garden two weeks after our return from holiday

The front garden just before I went to Wales at the end of August.

The dark patches show me where I’ve planted bulbs.

What I want to achieve is a “cottage” garden, which is very relaxed and informal. I think that’s what a garden is all about – somewhere to be relaxed and informal, just like the garden. There is still lots to do. I have 30 odd allium bulbs to plant, daffodils, the big thing you can see in the background in the first few photos with white daisy like flowers is being moved to the centre, there are plants in the back garden I want to move and then once spring has sprung, I’ll fill in gaps and move plants around because it looks like shit with colour clashes all over the place. I want lots of scent so two or three honeysuckles will be added to festoon themselves over the walls. But I’ll enjoy doing it.

I love the informality 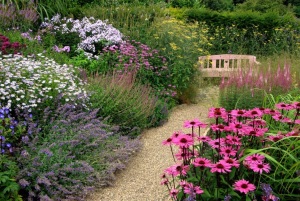 This is what I would like to achieve. A combination of these three would be ideal

Other people prefer a more formal and regulated garden. Good for them. If that’s what they like then I’m not going to criticise them. When it comes to gardens, I firmly believe in “Whatever turns you on.” Want gnomes? As many as you want mate. Nothing but roses? Good for you.

One of the things I also try and do is encourage wildlife into our garden, particularly insects and bees. While I have been known to use weed killer on those pernicious perennial weeds like dandelions, I don’t use pesticides. Pesticides don’t discriminate between good bugs and bad bugs. It’s a bug so it dies. Not a good idea. I try to achieve a natural balance in our garden. Doing so, particularly if you have used pesticides, can take a couple of years and you never actually get rid of every bad bug but you do get levels of infestation that are manageable.

Taking bees aside, I try to encourage hover flies and lady birds into the garden. If you have roses in your garden or grow vegetables and have a problem with aphids, I suggest you do the same.

A ladybird larvae. Do NOT kill just because it’s an ugly bastard

Ladybirds and their larvae will scoff upwards of 4000 aphids during their life cycle. That’s right! 4000! Hoverfly larvae will each munch their way through several hundred aphids before eventually becoming nectar eating hoverflies. So they are worth encouraging. Both hoverflies and lady birds like to feed on nectar but they need to do so on plants with fairly open flowers. Plants like ox-eye daisies, coreopsis, marigolds and Rudbeckia are ideal. If you’re happy to suffer a few aphids chomping your roses or lettuce, you will notice the difference in the wildlife attracted into your garden. More insects, often means more and different types of birds, hedgehogs, frogs and toads in the garden and that, to my mind, is a good thing. I have had sparrow hawks chasing blackbirds in my garden and that is a sight to behold.

Dude. Do you have a spade? I need to dig a big hole.

They’ll stop at nothing to nick all the good stuff in your garden and transfer to their own.

Gardening can be a dangerous occupation. I always keep a spade handy. Just in case.

They’ve been known to bump off a gardener or two and they pop up out of nowhere.

I always keep a few tools handy just in case some of the zombies round here start to go into one and launch a surprise raid to try and nick my lobelias.

So far I’ve been lucky and managed to beat any ZGRs (Zombie Garden Raiders) off with a sharp spade to the head.

I must admit it’s a bit of a pain disposing of a zombie head but, like with slugs and snails, I usually lob them into next doors garden and they  have a moan and a groan:

“Oi Terry! Them bloody zombies have been fighting in our garden again. There’s fucking zombie heads all over the lawn.”

“I bloody told you Chardonnay, them bleedin’ hollyhocks you wanted planted up attract those buggers like flies to a dog dump.”

“Are you sayin’ it’s my bloody fault we always find zombie heads in our garden? How come that bloke next door never gets any?”

“Coz he ain’t got any fuckin’ ‘olly’ocks in his garden you silly cow!”

“Silly cow? You bastard. That’s it! I’m staying round me mums. You can sod off.”

“Oh that’s right. Leave it to me to clear up all the bloody gore and brains again, then take it down the council tip and hope they don’t notice. Thanks a bunch you selfish old moo.”

“Stick it up your bum Terry. I’ve had enough. Where are the car keys………”

All over a bloody stray zombie head. See what I mean? Zombie gardeners are bloody dangerous. Pinch your plants, bury a trowel in your head and cause matrimonial conflict. Bastards.

Finally, a quick message for SDG. I’m afraid the slug deterrent experiment will have to wait until next year now. By the time I got round to trying out the nettle juice and smuggling the hostas out of PILs sight, they had all started to die back and slugs wouldn’t have been interested. Looks like we’ll have to wait until 2016 to make our fortunes.

On that note, it is time for me to leave.

Well hello. I’ve been gone awhile but before I go into why and up date you on what’s been happening, a quick word for Claudia who, while thinking I’m a dick doesn’t believe I’m Dick Dastardly and not the author of this here blog. It was fun at Battersea wasn’t it girl and really nice to meet your twin sister?

It has been manic at work over the last few months. We took on a new task and to say it’s cursed is probably an understatement. The internet signal on site is crap, the phone signal is crap, the equipment kept failing but worst of all, some of the staff were just absolutely bloody hopeless.

The work I do comes under a Home Office department and is regulated by them. One of the criteria is the ability to speak, read, write and understand English. Some native-born Brits that came along to work could probably manage one or two of those but all four? Jesus Christ, my bloody dog is more intelligent than some of the people who wanted to work for us. In fact, I’d go so far as to say that my dog’s POO was more intelligent than one or two of the amoeba brained Neanderthals that managed to find their way to site. Some couldn’t even manage that!

Fortunately, the Boss and I have managed to resolve the equipment, internet and phone problems and we’ve got good blokes working on site now that don’t need to be constantly supervised. I’ve just spent the last week staying up in London working in Battersea Park. We had a task up there last year for the same company and I hope it happens again next October. It’s a blast. Hard and tiring work involving long hours but I was working with a team I put together, they were all guys I had worked with before and they were superb  professionals.

I like Battersea Park. The River Thames runs along one side, it has a children’s zoo, a pagoda, many beautiful trees and we were blessed with great weather.

Battersea Park looking towards Chelsea Bridge at about 0800

I now have a few days off and have every intention of doing the absolute minimum possible although PIL may have a different view on that! A little light gardening may be about my lot. I will be writing separately about the progress taking place in our front garden.

Yep. Still got it. Nowadays though I keep it under control with regular trims to keep it neat and tidy. Clit, PILs beaver, stills makes regular visits and it’s a delight when she comes. It can get a bit messy though as she’s a bit of a wild animal when she gets excited!

Dexter is still a bonkers dog. We had to put a mail box on the wall by the front door because he kept eating the post (and occasionally the post mans finger tips). He adores going walkies out in the boonies and I love taking him. He burns off energy at a tremendous rate while I get some peace and quiet so that I can put my head back together.

More news is breaking as I write on the family front so I’ll write about PIL, Ed, Greg and CJ once I’ve had all the up dates on that front.

Well peeps. I hope that this post has found you all fit and well. I will be writing again real soon with an update on the garden and possibly details on the progress in the House of Chaos.