Another One Bites The Dust Goddamn It.

Christ on a bike!

This farming malarkey is hard work and I’m only dealing with a few animals and crops. Having said that I am enjoying myself. I’ve learnt some Welsh words like “Look you”, “Isn’t it”, “Boyo” and “Tidy”. I’ve learnt not to try and get an egg when a hen is sitting on it as they have sharp beaks and are prepared to use them.

Avoid John the neighbour who is a Brummie and can talk the hind leg off a donkey and judging by the number of three-legged donkeys around here, frequently does. I’ve realised that dogs can’t count as no matter how many balls you throw for Chalky, he always thinks there’s three. The pillock.

Birds are stupid and the bloody spiders here are gigantic. Last night I HEARD one walking across the floor! I had to open both French doors to usher the bugger out. There was no point trying to kill the blighter as I didn’t have access to any weapons big enough. A cannon may have been enough but the collateral damage wouldn’t have gone down well with Boo when she gets back.

This is what the Pest Control companies around here use to kill spiders. A bit extreme but so are the spiders!

Shortly after shooing the spider out last night I was startled by a “Tap, tap, tap, flutter, flutter” noise.

“What the bloody hell now?” I thought. “A fucking dragon?”

I looked around but couldn’t see anything so I concluded it was likely to be a branch tapping on the window. Then I heard it again. Strange. I still couldn’t see what was causing the noise, mostly because I was too lazy to get off my fat arse and take a proper look. 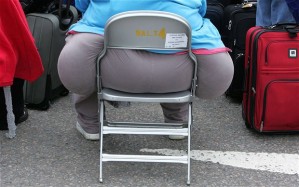 It was quiet for a while then I heard it again. This time I also saw movement out of the corner of my eye. Inside the log burner in the lounge was a bird! It must have fallen down the chimney and couldn’t get back out. See what I mean? Birds are stupid. It was only a sparrow but it made me think two things (I’m clever like that). First I thought how polite it was for a wild animal to be knocking on the log burners door for permission to come out. Secondly, and more importantly, how the fuck was I going to get a soot and ash covered wild bird out of there without getting aforementioned soot, ash and feathers all over Boos house? So I gathered up numerous towels, an old sheet and covered the door of the burner. I opened the burner door and the blighter flew out from under all the towels and sheet and flew around the whole of the ground floor trailing soot, ash and feathers everywhere.

“Should’ve shut all the the doors.” I thought belatedly.

Finally, after much pursuing of the tiny sparrow and after tripping over Chalky, who was also in hot pursuit, I managed to get the bird by the front door and let it out. I looked back in disbelief. The whole of the downstairs was like a war zone. There were feathers, soot, ash and bird shit everywhere!

“Jesus bloody Christ!” I thought. “How could such a small animal leave such a trail of destruction?”

Many hours later, after much use of vacuum cleaners, furniture polish, dusters, old rags filled with earwigs and much cursing the house resembled something vaguely habitable. I went to bed!

I woke up this morning and staggered downstairs for my first brew of the day. I fed Chalky and as I went to feed the goldfish, discovered one was missing. Well, it wasn’t exactly missing, it just wasn’t where I expected it to be. It was belly up at the top of the tank!

Bugger me! Another critter bites the dust!

16 responses to “Another One Bites The Dust Goddamn It.”