As ever at weekends there is always a shed load of stuff for adult males to do around the house. I am no exception to that. PIL has taken Greg and CJ to school and gone into town to do whatever it is that she does there. Probably look outrageously attractive, drink coffee in Starbucks and look cool. I, on the other hand have been given a list as long as your arm of things that need doing. Not least of which is mow the bloody lawn. I love gardening but mowing the lawn is a haemorroid in my life. So with so many things to do I decided to see what was on TV. 499 channels of crap was what was on TV but there was just one channel that caught my eye. Eurosport were showing the World Canoe & Kayak Sprint Championships. Result! Many years ago in my late teens and early twenties I was a keen canoeist and spent many a summer weekend instructing the fine art of paddling a kayak in a straight line. 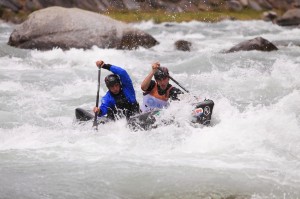 I met many young ladies this way. Despite what  my so-called friends think, dating back then when I was young did not consist of bopping a young lady on the head with a club and dragging them off to the nearest cave!

Oh no. What it meant was teaching the correct capsize drill resulting in lots of young ladies wandering around shortly afterwards in wet tee shirts. Best job I ever had! I met my first love being an instructor. Bailey was wonderful but that’s an entirely different story. Omar was my best mate at the time and he too was an instructor and like me, dead keen on canoeing. The pair of us started to compete in Wild Water Racing which is broadly similar to downhill ski racing but you raced through rapids.

A wild water racing C2 like I used to race

It was enormous fun. Omar and I trained twice a day. We ran to work each morning and each evening, come rain or shine, we would get together just up-stream of Kingston bridge on the River Thames and spend another hour and a half in our canoe racing up and down working on our stamina and technique. At weekends in the winter when we weren’t working, we travelled around the country to various rapid rivers and competed in races. We were quite good. We raced C2s which is a two-man canoe with each of us having a single ended paddle. 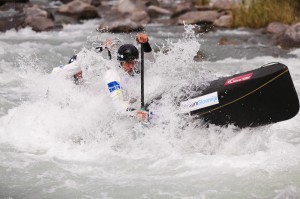 To say it was like an indian canoe was to compare a Skoda skip to a Ferrari but you get the idea. Unfortunately, some years after we packed up, I lost all my trophies, medals and photos so the images you see here are from the interweb but they give a clue as to what it was like. It was dangerous, some of the rapids we raced down were truly enormous but we were young and therefore totally indestructible. 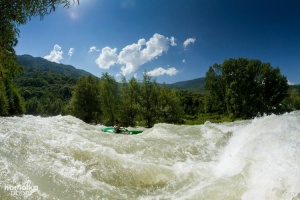 Sometimes we would look at a set of rapids and think; “Oh this looks good.” and we would jump in and swim down it. We had a brilliant few years. Omar went and lived in Australia and I haven’t been in a canoe or kayak ever since although there are times when I miss it and consider taking it up again but in a more leisurely fashion.

Note the rescue swimmers on the bank

A good friend of ours, Norman (as in Norman Wisdom) would come up to races with us. Norman didn’t compete, he came along to paddle down the river, have a good time and meet a girl in a wet tee-shirt. Norman was a nice helpful kind of guy but very accident prone. Things would just happen to him. He broke his ankle getting off a bus once and what he did to someones house is a tale all of its own. The last time I saw him he was off for his first ever parachute jump. 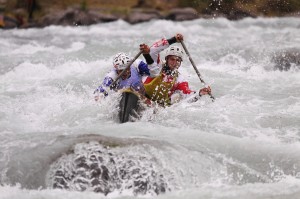 One particular weekend we were racing on the River Dee at Llangollen in North Wales. It was an important race for us as it was one of five races in the season that was “ranked” and you scored points according to where you finished. Top ranked in each class then went on for selection to the British team. The nice thing about the Dee race was that a canal ran parallel to the river from the centre of Llangollen up to Horseshoe Falls where the start was, and continued on to wherever it went to. Omar and I used this as our warm up before the race.

Love the expressions. I was the guy in the back, while Omar was in front although this isn’t us.

Race day arrived and we set off up the canal to warm up. Norman drove the car up to the start and met us there. We transferred our boat to the river and got ourselves sorted. However, I was having trouble fitting my spray deck on. To put one on it was a case of back, front, sides but every time I tried to put the bloody thing on at the front of my cockpit, the back came off. We were getting closer to our start time and I needed to get this thing on toot sweet. Norman volunteered to help and thinking he was going to lay on the bank and hold the back on I agreed. So Norm jumped in the river thinking that as we were next to the bank it would be maybe knee deep at most. Unfortunately for him, the river was about 10 feet deep just there and he disappeared from view, resurfacing about 15 yards downstream and heading for a lovely rapid known as “The Serpents Tail”.

So we went off to the start and left poor old Norm to his fate. We found out later that he had actually ended up swimming The Serpents Tail and was rescued by the swimmers and rescue boat at the bottom of the rapid. He was fine though. We won that race too. 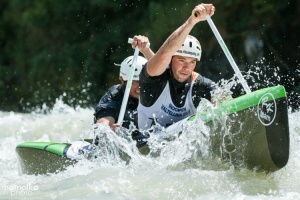 I have a great many fond memories of that time in my life and who knows, perhaps soon I’ll start again and race in the Masters or whatever they have these days. Or maybe I’ll just paddle up and down the river. It is a tremendous way to get and stay fit.

Ah. Just seen the time. I think I’d better go mow the lawn and get stuck into the rest of the jobs I’m supposed to do.