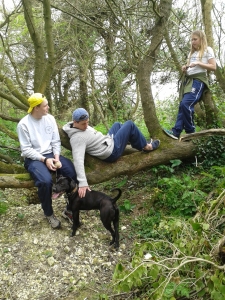 I love my kids. I think they’re great. I’ve spent their whole lives watching them grow up from tiny, helpless bundles to the characters they are today. Naturally, I’m biased but they are a constant source of wonder and bewilderment to me. Both PIL and I have tried our best to bring them up to be responsible human beings and I think we have succeeded. They are intelligent, well-mannered, humorous and generally a delight to be around. Bringing them up has been challenging on occasion. Despite all the books on bringing up kids (none of which we’ve read) it’s really a case of making it up as you go along. Being English, the only language I speak is English. So that’s the language we taught them. The Germans have a joke. “If you speak four languages you are upper class. If you speak three you are middle class. If you can speak two then you are working class. If you can speak only one you are English”. Sehr gut ja? I don’t know about other children but when my two boys reached the age of about 13 they spoke a different language to the one we taught them. Neanderthal. A typical conversation back then went something like this:

“Have a good day at school?”

“Good. I’m pleased you had a good day. Have you got much homework?”

“Getting stuck into tonight then?”

“Will you want any help?”

You get the idea. I had no idea what they were on about. PIL claimed she did but she is a woman and they know everything. (Oops, am I digging a hole for myself here?) They both grew out of that stage but even now I often wonder what on earth they are on about. You’ll notice the only words I understood were about food. Good God above can they eat! I remember buying thirty eggs (free range) one saturday because the whole tribe were home for the school holidays. By Tuesday they had all gone! All three of them are incredibly sporty. They train almost every day for the sports they play and enjoy so they must burn a million calories a day each but boy, do they know how to replenish. I’ll fancy an apple. All gone. A banana then. Also gone. Orange? None left. Some grapes? All scoffed. A bowl of cereal would be nice. Only three cornflakes left in the box. (Why they would leave three cornflakes is beyond me. One each perhaps?) Ok an egg sandwich? Its Wednesday, there’s none left. Bacon sarnie? No bacon. Aha! Some cheese. I’ll make myself cheese on toast. No blinking bread! Most people save to go on holiday. We save to buy food when the kids are on holiday. Their appetites are phenomenal and our pockets are empty!

Seeing their sense of humour develop as they’ve all grown up is also a fascinating thing to experience. It starts to develop with ‘knock knock’ jokes, progresses through the three ‘P’s (Pee, Poo and Puke) to a more developed sense of humour that often means listening to stories of things they, or their friends, have experienced. It must be said however that my two boys have not really grown out of finding breaking wind immensely funny mainly because of the reaction they get from PIL and CJ. I was recently pottering around in the back garden while the three of them played cricket. I was regularly hit by the ball which they found hilarious. It was only later when we were having dinner that I discovered that I was part of the score. A direct hit was a four, a hit on the head was a six and a hit in the goolies was a century! PIL almost choked on a carrot she was laughing so hard. They all found it extremely amusing. I was just covered in bruises.Thank God they were using a tennis ball. I hasten to add that no-one scored a century although they did get close. Gardening is dangerous with my lot!

Children are a delight. Mine are anyway.Along with PIL, they are without doubt the best thing that’s ever happened to me. PIL thinks the same. Watching them grow and develop has got to be the most fulfilling experience anyone can have. It is endlessly fascinating and economically disastrous. So they always have their hand in my pocket (and PILs), but I wouldn’t change a thing. Thank you guys for being such wonderful human beings. You all make my day every day.

Enough already. Time to risk life and limb in the garden. I hope you have enjoyed my latest post. Let me know some of your own experiences as a parent. I look forward to hearing from you.

Like Loading...
This entry was posted in parenting and tagged children, humour, parenting, PIL. Bookmark the permalink.